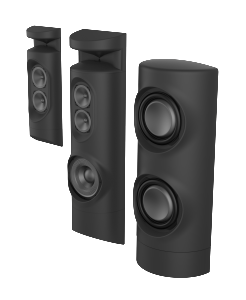 Anthony Grimani, an audio wizard and leader in the custom electronics industry, has assembled a team of cinema superstars to launch Grimani Systems, providing “integrated technology solutions for high-end private cinemas,” according to the company.

Grimani, named one of CE Pro’s Top 20 Most Influential Peoplein the custom electronics industry, joins inventor and acoustician Manny LaCarrubba, along with entrepreneur and audiophile David Steel in the new venture, launching at CEDIA Expo 2014.

As principal of PMI Ltd., Grimani has designed world-class home cinemas and professional studios for 25 years … but not with his own product line. His new company is building its own line of gear, starting with speakers, for other home theater specialists to install in their own Grimani-inspired media rooms.

The first product out of Grimani Systems is the CinemaOne (GS-C1) Audio Ensemble, inspired by LaCarrubba’s “breakthrough development of the Conic Section Array (CSA) waveguide,” the loudspeaker’s driving technology (details below).

According to the company, the CSA waveguide “ensures that everyone in the room experiences the same superior sound, delivering virtually unlimited power and extraordinary musicality in one integrated architecture.”

Grimani, who held executive positions at Dolby and Lucasfilm THX before founding PMI, says he has worked on “literally hundreds of products,” but only LaCarrubba’s invention moved him to create a company around his own products.

The electronics and amps are built into the cabinet of the speaker. In fact, Grimani is surprised that more loudspeaker manufacturers don’t take their cues from pro audio, where active speakers are the norm.

Putting amps in the speaker boosts stability and reliability, as “every separate box with cables that link to other boxes creates a potential failure point or a potential miswire,” according to Grimani Systems. “Ever come back to a job months or even years later and find that somewhere along the line someone (an installer for some other company usually) had to move some of your stuff around and didn’t get it put back exactly right?  Ever bring a beautifully wired rack out to a job site and then have to start tearing it apart because no matter what you do, you can’t seem to get the hum out of the system?”

The architecture of the sound system can reduce installation time by up to 70 percent, Grimani claims. There are no racks to build, no interconnects to wire, no speaker wire to pull and terminate, no lost time troubleshooting a ground hum, no loose wires to re-connect after the install ….

Following installation of a CinemaOne system, Grimani experts go onsite to configure and calibrate the audio.

All products in the ensemble are IP-addressable so Grimani technicians can tap into the system, diagnose problems and make adjustments from afar. They can perform software and firmware upgrades via the Internet and even revoice a system remotely if necessary.

“I love that,” says Tony Probst of Home Theater Solutions in Marin County, Calif. “From the installer’s point of view, if somebody were to buy his system on another continent, how loong would it take to get someone out to fix it? This way I can tap into the system and at least tell the customer what’s going on.”

Probst, known as an A/V guru in pro circles, is installing CinemaOne in an upscale theater in his showroom. He picked the solution after auditioning it one time.

“Unlike most audiophiles who have to listen to this cut, and then another cut and then make their decision, to me it’s either right or wrong,” he tells CE Pro. “I just knew right away it was right. “When I was watching a movie with CinemaOne, I wasn’t actually watching the movie, I was in the environment. This happens very infrequently. It was just right.”

Probst adds, “We’ve done a lot of auditioning. It’s in a league all by itself. Nothing really compares to it.”

While the Grimani Systems Website is still under development, you can get a hint of the company’s technology from some of the live sections of the site. Here’s how Grimani describes its CSA Waveguide technology (illustrated below):

Developed by Grimani Systems founder Manny LaCarrubba, the Conic Section Array (CSA) is a novel waveguide that represents a new class of ultra-wide dispersion device. The CSA grew out of Manny’s work with a previous invention called Acoustic Lens Technology (ALT).  Danish consumer electronics company Bang & Olufsen utilizes ALT. You can find Manny’s invention rising out of the dashboards of several of the major European automotive brands, and in nearly all of B&O’s higher end speaker and video products.

What these waveguides do is solve the age-old problem that all conventional high frequency drive units have with the beaming high frequency content in an ever increasingly narrow coverage angle. This means that you can only hear full frequency content if you are directly in front of the speaker (or nearly so).  It’s important to realize that ALL loudspeakers exhibit this behavior to some degree –Acoustic Lenses or a Conic Section Array GREATLY mitigate the problem.

Why is this “beaming” of high frequencies phenomenon a problem?  Well, it’s in the high frequencies (above approximately 3kHz) that the attack of a drum, the pluck of a string, the sibilance of the voice, the brassiness of trumpets and the “air” in music lives.  It’s the high frequencies that bring life to recordings; too little and everything sounds “soft” and un-engaging; too much and things get “hard” and “edgy” sounding — which is very fatiguing to the ear. This problem is particularly acute in loudspeakers for cinema use.

CinemaOne Audio is just the first large-room home-cinema system to launch from Grimani Systems. The company is working on an upgrade to Dolby Atmos, available later this year, as well as a 4K UHD Video Package for large private theater.