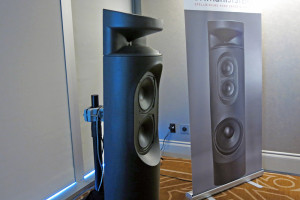 Usually when someone touts a revolution in speaker design, it’s not really revolutionary and its advantages underwhelm. Thus, despite the reputation of audio expert Anthony Grimani, I doubted that his new line of speakers, sold under the Grimani Systems brand, would impress me much. But everything about Grimani’s new system astonished me, from the configuration to the design details to, most important, the sound quality ‐‐ so much so that I went around the rest of the day
insisting that my pals in the press go hear it.

The genesis of this system was a list of 50 problems that Grimani and his colleagues keep encountering in their acoustics consulting practice. One of the key problems is that only a few seats in a typical home theater or listening room really sound good. To combat this problem, system designer Manny LaCarrubba engineered the Grimani Systems speakers to have far broader, more consistent dispersion than any conventional speaker. He achieved this largely through the use of a $450‐each German‐made compression driver feeding a 180‐degree waveguide, and crossed over to the dual 6.5″ woofers at a very low 1kHz. Grimani insisted that the speakers would create a solid center image even if we stood between them, and to my surprise they did ‐‐ but perhaps more important, the tonality didn’t change significantly off‐axis, and I got a nice sense of stereo no matter where I stood in the room. Each speaker has two 500W amps and a digital signal processing engine built in, and includes analog, digital, and network connections. The Beta speaker shown here costs $20,000 each, while the larger Alpha costs $30,000 each. High prices, certainly, but there are many pricier systems out there that can’t do what this one does.