Highlights and Personal Faves from CEDIA 2015 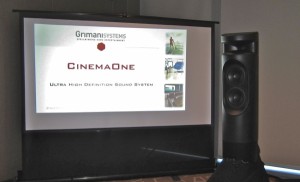 On the audio side Grimani Systems launched new, 3-way active “Cinema Audio Ensembles” for custom installations. The speakers are unique in many ways, including a claimed 180-degrees of horizontal dispersion extending even into the normally directional treble range. Their demo was strictly stereo, but when played back at anything like a reasonable level (they’ll play at unreasonable levels as well, but my ears won’t!) they performed superbly. It’s clear that a lot of thought and research went into developing this system. Unfortunately, their prices, which cover full surround packages (with immersive audio—Atmos, etc. optional at extra cost), start at $200,000 for the least expensive recommended system and rise to $300,000 for a package consisting of 13 speakers and 29 amplifiers!

Highlights and Personal Faves from CEDIA 2015