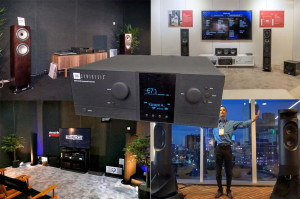 The new Beta speaker from Grimani Systems was the subject of the best two‐channel demo I heard at CEDIA 2015. Granted, the speakers are designed to be only a part of a complete surround system, but at the show, a pair of Betas got to strut their stuff in a traditional stereo configuration.

The Beta is an incredibly dynamic, actively amplified speaker that features a highly advanced waveguide with its compression tweeter. It possesses exceptional dispersion characteristics throughout the entire audio spectrum, which keeps the stereo sound field from collapsing when you sit off center.

There’s a lot of science, research, and experience behind the design of the Betas. Nevertheless, the proof of performance has always been in the pudding, and once Anthony Grimani started playing music through the Betas, it was clear that his claims were not mere boasts. If I could afford speakers that cost $20,000 apiece, I would’ve placed an order for a pair of Betas already—that’s how good they are.